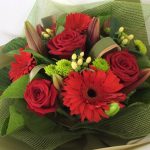 Yellow Posy is one of our bright yellow arrangement of flowers that will be sure to brighten anyone’s day.

A posy, also known as nosegay or tussie-mussie is a small flower bouquet. Posies are mainly given as a gift or carried at a ceremony. Posy flowers have existed in some form since at least medieval times. Back in those times they were carried or worn around the head or bodice. The term nosegay arose in as a combination of nose and gay. Therefore a nosegay was an ornament that appeals to the nose.

The name tussie-mussie comes from the times of Queen Victoria, when the small bouquets became a popular fashion accessory. The tussie-mussies include floral symbolism and may be used to send a message to a loved one.

Yellow Posy flowers are also used mainly in weddings. The bride will hold the bouquet, and the maid of honor will hold it during the ceremony. After the wedding the bride will toss the bouquet over her shoulder. It is believed that whoever catches the bouquet will be the next to be married.
Bouquets in vases or planters can be arranged in either formal or modern styles. Each type of flower has a different meaning and idea behind its use. In China certain flowers symbolize seasons. Such as the white plum blossoms represent winter. Where as peach and cherry blossoms represent spring. The lotus flower represents summer and chrysanthemums are the fall.

Be the first to review “YELLOW POSY” Cancel reply